You're a Sap, Mr. Jap is a 1942 one-reel animated cartoon short subject released by Paramount Pictures. It was the first cartoon featuring Popeye the Sailor in a series produced by Famous Studios, which took over the Popeye theatrical franchise from Fleischer Studios.[1] It is one of the best-known World War II propaganda cartoons, and also one of the few Popeye cartoons to not include either Bluto, Olive Oyl, or Wimpy.

The cartoon, which gets its title from a novelty song written by James Cavanaugh, John Redmond and Nat Simon, finds Popeye singlehandedly defeating the crew of a Japanese battleship in the Pacific Ocean. The cartoon was kept out of commercial release for years due to its racially offensive caricaturing of the Japanese and to the climactic sequence where the Japanese naval commander commits suicide by drinking gasoline and consuming lit firecrackers. 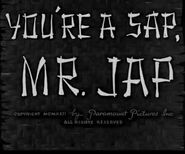 In the Public Domain in the United States.

Retrieved from "https://popeye.fandom.com/wiki/You%27re_a_Sap,_Mr._Jap?oldid=41612"
Community content is available under CC-BY-SA unless otherwise noted.