Creation and Development for Thimble Theatre

Willie Wormwood was created by E. C. Segar for Thimble Theatre during the comic strip's early run, of 1919 and part of the 1920s. In the strips, Willie Wormwood was a dastardly villain to Harold Hamgravy's hero and Olive Oyl's damsel, wherein they would enact short dramas and movie parodies in a format that lasted only for the comic's early period.

Willie's character was an old-fashioned villain, suave, well-dressed and mustachioed, having been Segar's own take of the iconic and archetypical stock "Villain" character that has existed since the 18th century in Victorian stage melodrama who was used as the embodiment of villainy and the evil nature of man in many of said stage shows, as well as in Vaudeville acts and classic silent film shorts, such as the 1913 short film Barney Oldfield's Race for a Life. However, he was eventually dropped from the series as more popular characters were being introduced (like Castor Oyl), years before Popeye's arrival.

While Wormwood himself never appeared in any animated Popeye media, a character who was also based on Wormwood's villainous archetype appeared in the 1943 Famous Studios animated short Cartoons Ain't Human, known as Roger Blackleg who, much like Wormwood himself, was also a suave and sinister villain with a top hat and prominent mustache. In the cartoon, Blackleg served as the main antagonist yet, unlike Wormwood, he was not a real person within the story but simply a cartoon character made by Popeye for his own animated short.

After nearly a century, Willie finally made a return appearance as late as 2012 in the second issue of IDW Publishing's Popeye comic series. In the story "The Worm Returns", he appears as a vaudeville actor who vies with Popeye for Olive's affections, with ulterior criminal motives.

Willie Wormwood was a dastardly villain who sought to win the hand of the naive and young damsel Olive Oyl (who would often fall for the sinister villain's suave words and cunning tricks) by any means necessary, even using her in his nefarious plots, but each time he would be bested by the odd efforts of a young Harold Hamgravy. Eventually, Willie was scared off for good and never bothered the young Olive and Harold again.

Much time had passed since Willie Wormwood's disappearance and Olive was now in a relationship with the man of her dreams, Popeye. One day, Olive decided to move closer to Popeye's house and it was then that she would encounter the suave Mr. Wormwood with no recollection of their past misadventures. Wormwood claimed to be a famous vaudeville actor and offered to help Olive and her family move in. Upon arriving at Olive's house, Popeye immediately grew jealous of Wormwood's "fancy talk" and his subtle wooing of Olive, until Ms. Oyl directed Popeye to leave. Later on, J. Wellington Wimpy overheard a conversation between Wormwood and a man named McSkeever, and discovered that Wormwood was still a nefarious crook who had only been trying to court Olive in order to find the location of a set of stolen oil paintings that were hidden away under the floorboards of Olive's new house. When Wimpy told Popeye this, the sailor confronted Wormwood and let him have it, much to Olive's disapproval.

Popeye and Wormwood (and eventually McSkeever) fought in an all out brawl as Olive rejected Popeye. She then decided to check under the floorboards to prove Popeye wrong, only to realize that there was indeed a treasure trove of rare paintings under the house. The now furious Olive went outside and helped the discouraged Popeye by whaling on Wormwood and McSkeever herself. Popeye then dealt a mighty finishing blow to Wormwood that knocked the dastardly villain out instantly, and the two nefarious crooks were taken away by the police, to never spoil another day again. 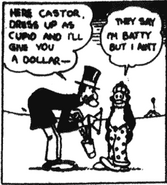 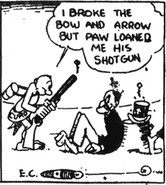 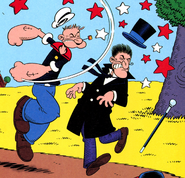