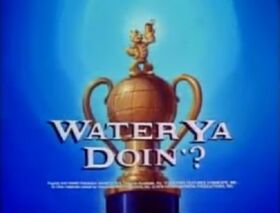 "Water Ya Doin'?" is an episode from The All-New Popeye Hour's "The Popeye Sports Parade" segment for Hanna-Barbera Productions in association with King Features Syndicate. It first aired on December 10, 1979 and was directed by George Gordon, Carl Urbano and Rudy Zamora. Popeye was voiced by Jack Mercer, Olive Oyl was voiced by Marilyn Schreffler, Wimpy was voiced by Daws Butler and Bluto was voiced by Allan Melvin.

The Neptune Water Championship is about to start so Judge Olive Oyl and Head Judge Wimpy greet the crowd. The competitors are getting ready on the beach as Popeye drives up with his surfboard on top of his van. He has trouble getting his board down because he forgets to untie it first, so he carries the whole van to the beach with it. Popeye's clumsy streak continues as he knocks down a row of surfboards and Olive at the end of the row. This does not make Olive happy.

Olive climbs up into the lifeguard's chair to judge as the surfers swim out to catch their first wave. Bluto is Olive's early favorite and she gives him a 9. Popeye follows him by hanging ten, then he does it inverted to get a mark of 10 from Olive. He also receives a 10 on his second wave for saving Olive when Bluto's underhanded scheme puts her in danger. Popeye, however, still has his clumsy streak because he accidentally squirts Olive in the face with a clam. Olive is not happy after that.

The second phase of the event is the speedboat race and Bluto's second cheat is to rope Popeye's speedboat to the pier. This causes the pier to collapse dunking Olive in the water. Fortunately, Popeye still wins even with Olive dragging behind in the rope. He tries to make amends by offering her a life-raft but he bungles that up too because it pops sending Olive flying through the air. She is not happy as she lands on the beach.

Part three of the competition is cliff diving and Bluto's third time to cheat. As Popeye takes his dive, Bluto catches him in midair and slingshots him away. Bluto then makes a perfect dive but Popeye falls back down on his diving board, catapulting Olive over the cliff. Olive is so unhappy about this that she gives Popeye a -10.

The fourth part is a catamaran race and Bluto goes all out with his tricks this time. First, he sinks Popeye with an anchor and then he fouls-up Popeye's sail. Then Bluto rips the sail off so a shark could slice the catamaran in half. Popeye still wins, however, because he lassos a sailfish and gets towed across the finish line.

The fifth challenge is a kayak race so Bluto ties Popeye's kayak to a whale. The whale drags the kayak under and a giant octopus wrecks it and captures Popeye. Popeye must eat some spinach to get free and he uses the whale to win the race. Wimpy awards Popeye the winner's cup for his victories. Popeye then hands the cup over to Olive to smooth things over for all his clumsiness.

Popeye gets the winner's cup
Add a photo to this gallery

This segment was from episode 40 in the series, aired in season 2, episode 14 of The All-New Popeye Hour. Below is a list of the other segments for this episode.

Retrieved from "https://popeye.fandom.com/wiki/Water_Ya_Doin%27%3F?oldid=41257"
Community content is available under CC-BY-SA unless otherwise noted.