The Hungry Goat is Popeye's 119th theatrical cartoon, released by Famous Studios on June 25, 1943. It features Popeye as the protagonist, "Billy the Kid" as the titular antagonist and Admiral Kurry as a supporting player.

As the cartoon's title appears, we are introduced to Popeye's antagonist in this film, an anthropomorphic goat, who sings happily as he strolls by. After a short while, he realizes something and asks the cartoon's operator to rewind to the title card, goes on to read "THE HUNGRY GOAT" and acknowledges that he should be starving. This time, he begins the cartoon by crawling on the ground, weakened. However, he soon notices a huge pile of tin cans that would satiate his hunger, but they lie beside a sign that reads "SAVE YOUR TIN CANS FOR WAR PRODUCTION", and are promptly transported away before the goat can devour them. Following the cans' vehicle, the goat arrives at the dock and, despairing at all tins being re-purposed, attempts to commit suicide by jumping into the sea - yet slams onto an obstacle that turns out to be a battleship.

The goat desists of his suicide attempt and runs to board the appetizing all-metal ship, where Popeye, as a Navy sailor, is carrying out his duties. Bent on eating all metallic implements, the animal starts with a bucket, leaving only its watery contents on the angered sailor's hands. When the latter gives chase, he falls into a trap that the goat had prepared beforehand. The animal further eats a chain, shells and other utensils, until Popeye tries to hammer him, but the intruder ingratiates himself with the nearby Admiral Kurry just in time, introducing himself as "Billy the Kid". The Admiral instructs Popeye not to harm the animal but then leaves on a taxi to go to the movies.

Popeye seizes the chance to chase after his adversary, mallet in hand, but when he is about to use it, the goat observes that, since the Admiral has gone to the movie theater, he might as well be watching the latest Popeye cartoon (none other than The Hungry Goat from Famous Studios) and thus able to see them. Noticing him among their theatrical audience, they see that this is indeed the case. As Popeye salutes his superior officer, the animal strikes him with the mallet. Enraged, the sailor gives chase as one of the Popeye fans in the theater wishes that his hero would eat spinach and turn the tables on his tormentor - although no such action transpires in the episode. Popeye is hit with a metal hook and tricked into stopping as he runs through the air, soon falling and becoming caught along a bomber plane's missile, then flown away.

At this point, a sign appears on the movie screen, calling Admiral Kurry to the phone, but this is, in fact, a ruse from the goat to eat various parts of the ship without the Admiral noticing. The latter soon returns to his seat, however, and when he witnesses his ship half-eaten, he rushes back to it. He is back on deck as Popeye manages to come down from the plane, but then both notice the trickster has run away and now looks at them from among the movie theater's audience, laughing wildly. 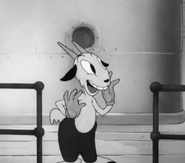