Popeye the Sailorpedia
Register
Don't have an account?
Sign In
Advertisement
in: Popeye's Episodes, The All-New Popeye Hour, The Adventures of Popeye,
and 2 more

Take It or Lump It 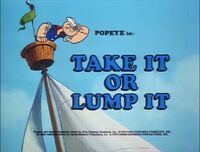 "Take It or Lump It" is an episode from The All-New Popeye Hour's "The Adventures of Popeye" in association with King Features Syndicate. It originally aired on November 12, 1979. It was directed by Ray Patterson and Carl Urbano. Popeye was voiced by Jack Mercer, Olive Oyl was voiced by Marilyn Schreffler and Bluto was voiced by Allan Melvin.

Popeye, Olive and Bluto are in the audience of a game show called Take It or Lump It. Bluto thinks he is going to be called upon to be the first contestant, because he knows the host - though in reality, someone who knows the people working on a game show cannot be a contestant. Popeye is chosen, which angers Bluto. So he disposes of his friend by shoving him out the window and into a garbage truck. Next, he disguises as another presenter in order to humiliate Popeye.

Called upon to the stage, Popeye is ready to play, while Bluto prepares to embarrass the spinach-eating sailor. He even insults him by messing up his name throughout. Bluto asks Popeye several questions, but the buzzer keeps on sounding before Popeye may answer. Each time this happens, Popeye is forced to "Lump It", which means he is put through humiliating situations.

First, Popeye has to pick one of three doors. He chooses door #2, which reveals a hula dancer. Popeye thinks he is going to Hawaii, but actually gets sand dumped on him. Later, Popeye has to ride a fast-moving mechanized horse.

Olive eventually joins Popeye to help him, but she too is forced to suffer the consequences after seemingly missing a question.

Finally, in desperation, after hearing the last question, Olive makes a buzzer sound before the real one goes off, thinking that she beat the buzzer. However, they still lose, and, for their final punishment, Popeye and Olive must carry many groceries while riding a unicycle on a high wire. Bluto tries to trip them up, but this ends with Bluto exposed.

In the end, Popeye eats his spinach, turns the tables, and he along with Olive give Bluto just desserts by sending him into outer space.