This article is about the occupation. For the comic story, see Strong Man!.

"Strongman" refers to an exhibitor of strength at public events in the 19th and early 20th century who typically performed in circuses, carnivals, and vaudeville acts, and would display various feats such as lifting heavy objects or breaking materials while being advertised as superhuman or "The World's Strongest Man". Because of this, strongmen were a somewhat recurring element in Thimble Theatre as well as later Popeye cartoons and comics, as a way to showcase the sailor protagonist's might and the strength of his opponents.

In Thimble Theatre, Popeye would occasionally encounter former strongmen turned villains or face off against certain strongmen in fights. In the comics that followed Thimble Theatre, such as those by Bud Sagendorf which ran from 1948 to 1984, occasionally featured Popeye as a strongman or had him encounter many strongmen (usually Bluto/Brutus) to face off against. The role of the strongman was sometimes adopted by Popeye and Bluto in competitions to outperform one another in both cartoons and in comics, especially in the classic cartoons like King of the Mardi Gras, Quick on the Vigor and the 1960 TV episode "Muskels Schmuskels".

Popeye as a strongman in King of the Mardi Gras

Bluto as a strongman in King of the Mardi Gras

Bluto as a strongman in Quick on the Vigor 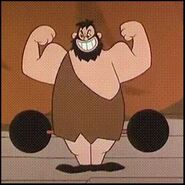 Brutus as a strongman in Muskels Shmuskels
Community content is available under CC-BY-SA unless otherwise noted.
Advertisement