Strong To The Finich! (art show)

"Strong To The Finich!" is a tribute art show sponsored by King Features Syndicate celebrating Popeye's 85th birthday, which features works from over 100 artists from around the world. The art show was first held on September 5th, 2014 at the Hero Complex Gallery in 2020 South Robertson Blvd., Studio D Los Angeles, CA 90034. The artwork is still available at the complex and can be viewed on Thursday through Sunday from 11am to 6pm, with artwork available for purchase on their website.

Joseph Game (aka Chogrin) was the art show's host and curator: a devoted Popeye fan and illustrator who states that the art show was "four long years in the making" and his own work is also featured among the exhibits.

The artworks featured at the exhibit range from traditional to abstract. Many works pay homage to the sailor, Thimble Theatre, his many cartoons throughout the decades, his various comics, his supporting characters from various media (both well-known and obscure ones) and even noted individuals who have been involved with the Popeye franchise, such as original creator E. C. Segar. Others are respectful homages to classical works of art with a Popeye twist or depictions of Popeye's many battles throughout history with his various foes.

"Popeye vs. Kid Klutch" by BeastPop 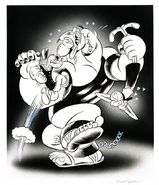 "Popeye versus Boola!" by Brent Engstrom

"Popeye in Shiver me Timbers!" by Shawn Dickinson