Spinach is a leafy vegetable with a high vitamin content, making it a healthy and nutritious food for human consumption. In most media featuring Popeye, it is used as a last-minute device in which the hero, in danger, pulls out a can of spinach from his shirt or otherwise acquires the vegetable and eats it. This gives his already extraordinary strength a tremendous boost, helping him withstand his enemies' attacks and all kinds of adverse situations.

This did not initially exist in Segar's comic Thimble Theatre, where Popeye originated, later simply becoming the food that Popeye favored in order to remain strong, before seeing more widespread use in post-Segar comics. Since the earliest animated cartoons, however, as produced by Fleischer Studios, it was introduced in its strength-boosting capacity and in this form would remain a staple of all of Popeye's screen incarnations.

The animated cartoons more notedly adhere to a format in which spinach is Popeye's main means for overcoming the greatest of obstacles. Even if the cartoon acknowledges Popeye's immense strength to begin with (later ones from the Famous era make him much weaker before spinach), consumption of the vegetable augments Popeye's physical might to the extreme, allowing the viewer to enjoy a power fantasy and enabling the sailor to even break the laws of physics at times.

In Popeye's dealings with opponents such as Bluto, spinach is consumed when the sailor's well-being is threatened or Olive Oyl is on the verge of being abused. After eating the vegetable, Popeye strikes at the antagonist with his increased strength, wherein the blows can immediately render the erstwhile competitor unconscious, send him airborne to a distant destination, initiate the use of various props which serve to immobilize and otherwise humble him, etc. Often, this comeuppance comes in the form of a humorous reprieve to what had been a tense and life-threatening situation and serves as a concluding "punchline" for the cartoon episode.

Spinach as eaten by others

Popeye is not the only character in the franchise to eat spinach; other characters have consumed it as well. For cases involving female antagonists such as the Sea Hag, since Popeye cannot clobber women, it is Olive Oyl who ingests the vegetable in order to defeat the villainess. In the theatrical shorts Hospitaliky, its color remake For Better or Nurse and Beaus Will Be Beaus, Popeye force-feeds Bluto spinach. At least in the animated cartoons, everybody would gain a surge of power comparable to Popeye's. Interestingly enough, while being so powerful, it is commercially available in Popeye's stories. Literally anyone can buy a can of spinach at the nearby grocery, but Popeye seems the only consumer. Brutus once managed to monopolize the spinach market to depower Popeye, but the villain himself did not consume it. In the television series Popeye and Son, Popeye Junior would eat spinach to increase his strength although he dislikes the vegetable.

Spinach is widely associated to Popeye by the public. Due to his promoting the vegetable, the sailor hero has received honors from the spinach industry, such as the statue erected in Crystal City, Texas (the "Spinach Capitol [sic] of the World", as described on its Popeye-featuring welcome sign) in 1937.

Popeye-brand spinach (pictured right) continues to be sold by the Allen Canning Company. 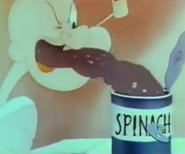