The Society of Sagendorks ("S.O.S.") is a Popeye fan-club and organization primarily focused on admiring, preserving and distributing the Popeye-related works of Bud Sagendorf. The club is headed by comic book historian Craig Yoe (the perennial keeper-of-the-flame), who (along with Clizia Gussoni and the rest of his order) was responsible for the compiled reprints of Sagendorf's Popeye comics in 2013 under the Popeye Classics volumes, as well as the individual monthly reprints of the comics (both published by IDW) for modern audiences to enjoy.

Craig Yoe humorously refers to his club as a sinister organization out to conquer the world in the name of Sagendorf, and has written statements denying his involvement with them in pages of the Popeye Classics volumes:

Cover of Issue 35 from the Popeye Classics collection 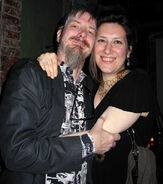