Popeye the Sailorpedia
Register
Don't have an account?
Sign In
in: Animals, Species, Races and Tribes, Villains,
and 2 more

Sea monsters are any number of large and dangerous sea-dwelling beasts of varying species and sizes, which are often regarded as legendary due to their rarity, and feared by the sailors who know of them. They have appeared throughout Popeye's history, mainly as violent antagonists who live deep within mysterious seas, emerging only to attack ships that enter their territories. According to Popeye, they are very rare and because of this they are sought out by poachers who would use them for monetary gain.

By far the most common type of sea monster that Popeye and others have encountered. They come in a variety of forms, but mostly resemble gigantic, green, serpentine reptiles similar to dragons that have ridges along their backs and may usually have fins. Others may resemble aquatic finned dinosaurs or not even look like serpents at all, such as the ones that resemble iguana-like dinosaurs but are still referred to as sea serpents. Sea monsters tend to make their homes in the waters around islands, such as the vicinity of Popeye's home island.

Abnormally large species of cephalopods that resemble octopuses but often have the beaks of a squid and may be able walk on land, usually referred to as sea monsters by Popeye and others, have occasionally appeared as antagonists. This is likely due to giant cephalopods being associated with the Kraken, an ancient sea monster said to resemble such species, specifically, a giant squid.

The Sea Hag has her own sea serpent, which has traits of both a serpent and a giant cephalopod, having the overall body of a serpent but with giant tentacles. She used this beast in Popeye's Voyage: The Quest for Pappy, in hopes of destroying Popeye's ship and catching the sailor himself, in order to fulfill a prophecy. According to the film, the beast itself was also the one responsible for stranding Poopdeck on an island.

While not technically a sea monster, the Hag herself can transform into one at will, specifically one resembling the legendary Greek creature Scylla, having a lower body and arms comprised of tentacles, but without the wolf heads associated with the Scylla.

Poopdeck Pappy had his own trained giant cephalopod, which he named Charlie, who was the "black guard" of the island he was stranded on. He used this beast in "Me Quest for Poopdeck Pappy" to kill any intruders who entered his island and unknowingly sicked Charlie on his own son Popeye when he thought he was an intruder. However, Charlie was easily beaten by Popeye.

Monster of the Sea

The Monster of the Sea was a beast that plagued the seas surrounding the island Poopdeck Pappy was stranded on and would often torment the old sailor. This dreaded creature equally appeared in "Me Quest for Poopdeck Pappy", where it came to attack Poopdeck again, but this time, the beast was ultimately defeated by Poopdeck himself with the aid of Popeye's spinach.

A friendly sea monster was discovered by Polly in the Popeye and Son episode "The Sea Monster". The creature appeared under Polly's boat and she noticed that a giant clam was biting down on its tail. After she got rid of the bothersome clam, the sea monster became enamored with Polly and began following her from then on. Eventually, Bluto sought to capture the monster for himself in hopes of selling it to a zoo for a large sum of money. In the end, the beast was saved from Bluto thanks to the combined efforts of Popeye Junior and Polly. The sea monster then went back to the ocean, where he met a female monster who he instantly fell in love with.

The sea serpent caught by Popeye in The Island Fling

The fake sea monster from Cookin' with Gags

The Monster of the Sea from "Me Quest for Poopdeck Pappy"

A sea monster from Popeye and Son 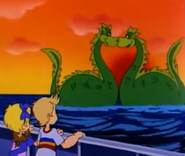 The Sea Hag's sea monster from Popeye's Voyage: The Quest for Pappy