A sailor, seaman or mariner is a person who navigates a ship or otherwise helps in its operation. Main character Popeye is a sailor and, although he has gone into adventures in all kinds of settings, he would as soon set out on seafaring voyages. Popeye has been depicted either as an independent sailor, a Coast Guard or a member of the U. S. Navy on different media.

Popeye is widely regarded as a prototypical sailor; tough, rough, and fond of going on adventures across the seven seas. As well, his exploits as a U. S. Navy sailor have been featured in several animated cartoons since the 1940s.

Sinbad (or Sindbad) is the protagonist of several Middle Eastern stories contained in the book Arabian Nights. A merchant who thrived on travel and made his fortunes wandering the seven seas, Sinbad has become a figure associated with daring and adventure. Popeye media has depicted him as an antagonist to the main character, in Popeye #166 and Popeye the Sailor Meets Sindbad the Sailor (where Bluto played the antagonist's role, as he often would).

These characters are also sailors: 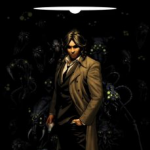