Punch and Judo is Popeye's 184th theatrical cartoon, produced by Famous Studios and released on November 16, 1951.

Popeye comes to visit a run-down orphanage, bringing a television set as a gift for the orphaned boys. They turn it on to see that a boxing match is about to begin - with Popeye as the challenger. He runs off to make it to the arena, where the current Champ (a large, brutish fellow) awaits. After the referee gives both opponents some rough instructions, the fight begins. Round one has Popeye get a cauliflower ear and be knocked stiff as a board. Between rounds, the sailor's inner self comes out to revive and give himself some tips. Round two therefore has him smartly dodging the Champ's blows, then disappearing into his own trunks to follow with an uppercut that sends his foe flying. A further string of punches, and the Champ is made into a monkey.

As round three is about to begin, the Champ decides to cheat. As Popeye gets ready to land a blow on the Champ, the Champ quickly dodges it, gets behind Popeye and proceeds to crush him by wrapping his arms around Popeye's bare chest in a tight reverse bearhug. He abruptly lets go and jabs a live electrical wire at Popeye. This causes Popeye to receive a severe electric shock and he grunts in pain as arcs of electricity course over his body. The shock leaves Popeye stunned and the Champ takes this to his advantage: Popeye is subjected to his opponent's telegraphing his blows, with an actual trick telegram containing a spring-loaded brick. Popeye is soon out cold and the count begins. The orphanage boys watch all this on television and one of them brings out a can of spinach to feed his hero trough the TV set. Popeye breaks the ice encasing him, and hammers his opponent out of the television. Popeye and the referee also emerge, with the latter finishing the count and declaring the sailor the new Champ. 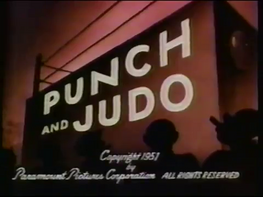 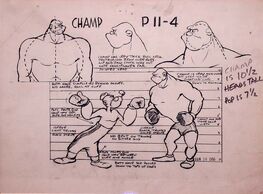