This article is about the character. For the animated short, see Possum Pearl (cartoon).

Possum Pearl (voiced by Judy Canova) is the main antagonist in the Famous Studios cartoon Hill-billing and Cooing (1956). She is over six and a half feet tall, with shoulders over 3 feet wide, and a 50" chest. She might be considered the female equal to Bluto. In a gender-role reversal of the Popeye-Olive-Bluto triangle, she and Olive Oyl end up fighting over Popeye, with Olive losing until she eats Popeye's spinach, grabs Possum Pearl by the hair and swings her into outer space.

Possum Pearl holds the distinction of being the only secondary Popeye character to be spun-off into a cartoon of her own: she appeared in her first and only short, also named Possum Pearl (1957). Seymour Kneitel was constantly "testing" new characters to see if they could become part of the Noveltoons rotation. After Pearl's appearance in Popeye's Hill-billing and Cooing in 1956, he gave her a chance to headline her own cartoon, yet it was not successful enough with audiences to warrant another one. 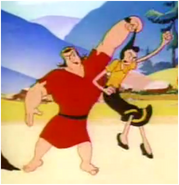