The image of Popeye is often used in real-life bodybuilding competitions and by professional bodybuilders in events, as the character is seen as a symbol of peak and healthy physical fitness.

The Popeye's Fall Classic is an annual bodybuilding championship named after the iconic sailor who also serves as the event's mascot. Because of the event, much exercising merchandise and advertisements have been made featuring Popeye as a prominent symbol of this and other similar bodybuilding events. 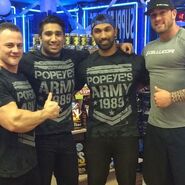 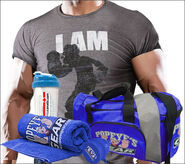 A detailed article explaining the benefits of Popeye-sized forearms in physical fitness
Community content is available under CC-BY-SA unless otherwise noted.
Advertisement