This article is about the characters. For the comic story, see Pirate!.

Pirates are sea-based outlaws that use a ship to commit the raid or pillage of other vessels or seaside settlements. They enjoyed great success during the XVIII century. In the comics, Popeye is known to dislike pirates and has fought them many times, with his main source of money being in fact the pirate treasure he has been able to retrieve.

The following characters are pirates: 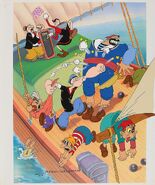