Popeye the Sailorpedia
Register
Don't have an account?
Sign In
Advertisement
in: Characters, Male Characters, Children,
and 4 more

Creation and development in Fleischer Studios

They first appeared in 1940 in Fleischer Studios's Wimmin is a Myskery ("Poopeye" is replaced by "Pepeye" in this episode), however their first appearance was only in a dream sequence as Popeye's children. Their first appearance proper as his nephews occurs in the 1942 short Pip-eye, Pup-eye, Poop-eye an' Peep-eye. Their existence would indicate that Popeye's mother and/or his father had at least one child other than Popeye. However, since Poopdeck Pappy stated that Popeye was his only child in Goonland, it is likely that they did not have any other children and that Popeye's nephews are more distantly related to him. They were only featured in two shorts of the Fleischer Studios era and were voiced by Jack Mercer, with his voice sped up to sound higher-pitched.

They would be featured more prominently in the Famous Studios era of Popeye cartoons and would be among the few characters from the Fleischer era to make semi-regular appearances, even more so than prominent characters from the Fleischer era, like Wimpy. Some cartoons (such as Big Bad Sindbad and Patriotic Popeye) only feature two or three nephews, with no explanation as to the other(s)'s absence.

After the end of the Famous Studios era, the nephews would remain absent from Popeye media throughout the 1960s and most of the 1970s.

Popeye's nephews returned in the 1978 cartoon The All-New Popeye Hour, where they would often appear in short, "moral" segments that were shown between longer ones. This allowed for the rare sight of them together with Swee'Pea. In these segments they would mostly appear along with Mr. No-No.

They have not been featured in any major Popeye media since. 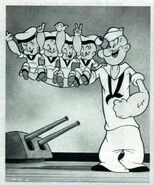 The nephews in their World War II attire 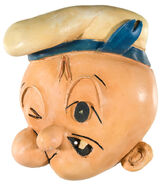 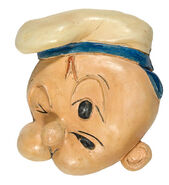 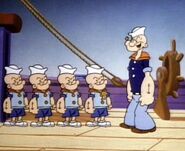 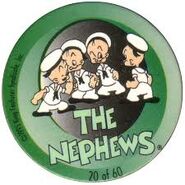 Popeye Pog featuring the nephews from a 1995 Kids Meal