Popeye the Sailorpedia
Register
Don't have an account?
Sign In
Advertisement
in: Characters, Male Characters, Pirates,
and 3 more

This article is about the character. For the comic story in which he first appears, see Patcheye, the Pirate!.

Patcheye the Pirate is Popeye's great-grandfather. Once a fearsome pirate captain, he continued to exist in his ghostly form, trapped in a treasure chest until he was freed by Poopdeck Pappy and Swee'Pea. Since then, he has come into conflict with Popeye as well as the latter's family and friends. Popeye is usually at odds with Patcheye because his contempt for pirates is matched only by his dislike of ghosts.

Patcheye was created by Bud Sagendorf in 1963. He was featured in the first story, "Patcheye, the Pirate!" of the Popeye the Sailor comic book series, in issue #67. He also appeared in the first story, "The Billowbrew Ghosk", of the comic book series' issue #124, as well as in the daily comic strip story "Patcheye the Pirate!", which ran from January 28, 1971 until April 10, 1971.

Patcheye greatly resembles Poopdeck Pappy and Popeye, complete with a corncob pipe, albeit with a black beard and pirate captain garb. He also has a pegleg, gold hoop earrings and an eyepatch to cover his missing right eye. In the daily comic strip story, he also sports a braided ponytail and does not wear the gold earrings. His parrot Matey goes everywhere he goes, and the pirate is often seen with the bird perched on his shoulder, although Matey does not appear in the daily strip story. Patcheye is never seen wearing a sword on his belt, yet he always has one in his hand when needed. In the Billowbrew story's pages, his sword instead replaces his right hand, much like a hook would.

Two hundred years in the past, Patcheye was a dreaded pirate captain. During his days of plundering the high seas, he acquired millions of dollars' worth of ill-gotten booty. He disappeared at sea and nobody ever knew what happened to him. Before he died, he claimed he would come back and train the first male child in the family that said he wanted to be a pirate. This is known as 'The Family Curse' by Popeye and Poopdeck Pappy.

Even now that his ghost has returned, the true story still may never be known about his death. When Pappy and Swee'Pea first release him and his parrot Matey from his sea chest in issue #67, he claims his crew ran him through, stole his treasure and locked him in the chest. Instead, in the comic strip story he claims he was tried for piracy and hanged from the yardarm of his ship.

Pappy adores his grandfather and calls him the greatest member of the family. He also refers to him as "...a won'erful swab! Mean, blood thirsty an' nasty!" and "...a man -er- gosk after me own heart!"  to Swee'Pea. He is, however, afraid of Patcheye's family curse.

If Patcheye was Pappy's maternal grandfather, that would make him the father of Granny. This may be unlikely, however, because Granny does not recognize him in the daily comic strip story and Patcheye also makes her walk the plank while teaching Swee'Pea how to be a pirate. Although, Popeye does describe him as "...a horrible, nasty pirate and he hates dames!" so it may be possible he would make his daughter walk the plank. Indeed, there is a strong family resemblance. 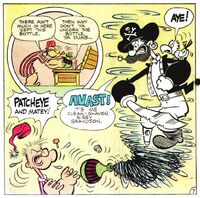