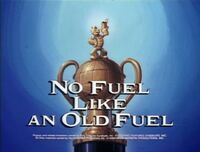 "No Fuel Like an Old Fuel" is an episode from The All-New Popeye Hour's "The Popeye Sports Parade" segment for Hanna-Barbera Productions in association with King Features Syndicate. It first aired on December 17, 1979 and was directed by George Gordon, Carl Urbano and Rudy Zamora. Popeye was voiced by Jack Mercer, Olive Oyl was voiced by Marilyn Schreffler, Wimpy was voiced by Daws Butler and Bluto was voiced by Allan Melvin. 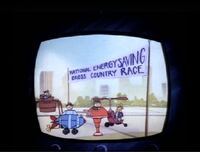 Tomorrow is the day of the National Energy Saving Cross Country Race. Popeye and Olive are watching a news report on it on TV when Professor Wotasnozzle calls on the phone. He plans to enter his car in the race to test his new fuel and wants Popeye to drive. He calls his car The Wotamobile. Bluto is at Olive's front door listening to the conversations and he plans to drive the Professor's Wotamobile instead of Popeye.

Bluto rushes to the Professor's house disguised as Popeye and tricks him into signing a contract to drive his race car. Bluto drives off in the Wotamobile, to which he now calls it "The Blutomobile", just as Popeye and Olive arrive but he does not take the energy-saving fuel. Bluto pushes a button in the car to make it fly over Popeye's car. Popeye loses control and drives into a sailboat in the Professor's backyard. Without a car to enter the race, the Professor cannot test his fuel, so they enter Popeye's car. When it ran into the boat it formed a perfect boat on wheels. Olive even christens it, "The Popeyemobile."

Next day, was the day of the race. As Popeye, Olive and the Professor drive up to the starting line, Wimpy is announcing the start of the race in his hot air balloon, for which he will ride in for the duration of the race. Bluto does not waste any time to begin cheating and steals Wimpy's scissors and cuts the starting ribbon himself, so that the race would start early.

Next, Bluto uses the car's tow line boom to hook Popeye's 'car-boat' (aka The Popeyemobile) then uses his car's rocket busters to fly off with it. Bluto drops them off in a river and leaves them to go over the falls. Popeye eats his spinach and swims back up the falls and gets back into the race. For Bluto's next trick, he uses the car's air horn to start an avalanche as they drive through the mountains. Popeye punches all the ice and snow out of the way and continues on with the race.

Bluto continues to cheat by stealing the Professor's fuel as they are driving through the desert. When Popeye's sailboat rolls to a stop, Bluto drives back and uses the car's claw to kidnap Olive and gives back the fuel. They refuel and get back in the race sailing into the bay towards the finish line.

Bluto uses the car's wings again to fly past Popeye but flies too close to a bridge. Olive escapes from Bluto by grabbing onto the bridge and landing into Popeye's sail. Bluto then runs out of fuel himself and crashes into Alcatraz prison. Popeye wins the race and gets a victory parade with his 'sail car' carried on top of a 'cable car'.

Bluto towing Popeye over the falls

Alcatraz Island
Add a photo to this gallery

This segment was from episode 41 in the series, aired in season 3, episode 1 of The All-New Popeye Hour. Below is a list of the other segments for this episode.

Retrieved from "https://popeye.fandom.com/wiki/No_Fuel_Like_an_Old_Fuel?oldid=41597"
Community content is available under CC-BY-SA unless otherwise noted.