Nix on Hypnotricks is Popeye's 101st cartoon, released by Fleischer Studios on December 19, 1941.

Hypnotist I. Stare is practicing his tricks with a goldfish, with little success, so he decides to enlist a human subject. After choosing at random, he telephones Olive Oyl and, with a "Come to me, come to me" chant, he puts her in a trance and on her way to his apartment. Popeye, who was on a date with Olive, picks up the phone and struggles with the hypnotic waves still emanating. He rushes after his girl through heavy traffic, then follows her when she inadvertently gets on top of a building in her hypnotized state. As they move from rooftop to rooftop, she is saved from falling to her doom, but her sailor boyfriend nearly falls himself. He manages to bounce back up, however, and they both end up walking atop a building under construction, Popeye in a similarly dazed state after bricks hit his head. He comes to his senses just in time to see his girl nearing the hypnotist's grasp, leading him to eat his spinach, turn into a Superman-like superhero and make short work of the trickster. Olive is still hypnotized after he rescues her, so he wakes her up with a slap. This does not sit well with Olive, who showers him with punches. 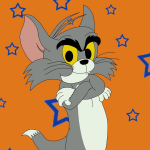