Popeye the Sailorpedia
Register
Don't have an account?
Sign In
Advertisement
in: Characters, Aliens, Species, Races and Tribes,
and 4 more

Martians are hostile aliens from the planet Mars, which appeared in the 1938 comic strip "Popeye and the Man from Mars" in Thimble Theatre by E. C. Segar and also in later Popeye comic books and a few cartoons.

Martians resort to various plans and schemes in their intent to conquer planet Earth.

Martians made their debut in 1938 in the Thimble Theatre comic strip "Popeye and the Man from Mars". Since then, Martians have occasionally appeared throughout Popeye media as foes.

Martians would return in the 1948 comic book series, where they would occasionally try to take over the planet, appearing infrequently over the decades until the title's end in 1984.

During the Famous Studios era of Popeye shorts, Martians made two appearances, however, they looked nothing like their Thimble Theatre incarnations, looking differently every time they appeared.

In the 1960s television series, Martians were involved in two episodes. In "Ace of Space", Martians sent down one of their robots to study humans for their invasion, however they were not physically seen and only heard when giving orders to their robot; however, they could be seen in the later "From Way Out".

Martians appeared in the vinyl story titled Popeye and the Man From Mars, released as a tie-in for the 1960s television series. In this story, Wimpy poses as Martian twice in order to trick Popeye into buying him hamburgers.

In the original comics, their appearance is that of tall men with pink and red eyes with oddly shaped heads and thin arms who wear black robes and fez-like hats. At least some Martians have been shown to be skilled shapeshifters, and can freely alter their forms to resemble any other species or object, making it difficult to say whether they even have a true form. The cartoons gave Martians different appearances more akin to the "little green men from Mars" cliché. In Rocket to Mars, for instance, they are depicted as short and duck-like, except for their more humanoid emperor, who bears a marked resemblance to Bluto while still having green skin and a large nose (though his nose was pink instead of green). In Popeye, the Ace of Space, they are depicted as completely identical humanoid beings who all share the Famous Studios Bluto's body shape, but with red clothes, light green skin and peculiar plunger-shaped antenna-like ears, and they speak in a completely alien language. In the 1960s television series, they truly resemble little green men with bulbous heads, a single antenna on their heads, and red eyes.

"Popeye and the Man from Mars"

Far off on the red planet Mars, the Martians plotted and planned for their conquest of planet Earth and would soon face off against the mighty Popeye.

Since their first encounter with the human sailor, the Martians have made several attempts to conquer Popeye's homeworld.

The vengeful martians would eventually return after hearing a radio broadcast about Popeye's great boxing prowess. The Martians then sent down their own mighty Martian Champion Jetoe in hopes of tearing the mighty sailor to pieces in a boxing match. The powerful Martian's shapeshifting abilities prove most deadly against Popeye, especially when he starts molding his hands into weapons. But when Popeye is sent flying by a punch into a spinach patch, he is able to heal and regain his stamina, and pummels Jetoe until he begs for mercy, but his pleas are but a ruse and Jetoe quickly gets back up, eats spinach himself in hopes of using it to empower himself and destroy Popeye, but instead of becoming mighty, his powers go haywire as when he tries to transform into a Martian lion, instead becoming a helpless little kitty to subsequently remain trapped in that form for good due to spinach being harmful to Martians. 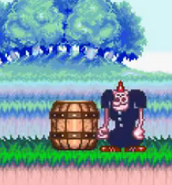 The Martian Emperor from Rocket to Mars

The Martian Robot from the episode "Ace of Space"

The Martian Maulers from the episode "From Way Out" 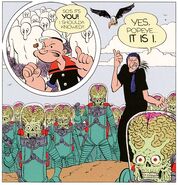