Popeye the Sailorpedia
Register
Don't have an account?
Sign In
Advertisement
in: Characters, Male Characters, Villains,
and 4 more

The Martian Emperor is an adversarial character in the Famous Studios cartoon Rocket To Mars. A dictatorial sovereign, he commands his followers to conquer Earth.

While the rest of the Martians in this cartoon are simple-minded duck-like creatures on the order of Dr. Seuss's "Sneetches," the Emperor is a muscular, bearded, humanoid menace greatly resembling Bluto. He differs from Bluto in his green complexion (matching the rest of the Martians), bulbous red nose, and reverberating voice.

Unlike Bluto as portrayed by Famous Studios, the Martian Emperor does not show any interest in Olive Oyl. His sole desire is for domination and power. 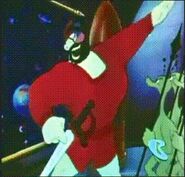