Popeye the Sailorpedia
Register
Don't have an account?
Sign In
in: Characters, Female Characters, Boxers,
and 3 more

The "Mae West caricature" was the owner of a Sporting Goods store who tried to teach Olive Oyl the art of self-defense but ended up falling for her man Popeye.

This character was created by Fleischer Studios for their 1936 short Never Kick a Woman. The character herself went unnamed but was clearly a caricature of Hollywood star Mae West and even sounded like the famed actress, even using her catchphrase "Why don't you come up and see me sometime?", among others. Her voice was provided by Bonnie Poe.

As Popeye and Olive Oyl pass a sporting-goods shop, they see an athletic woman demonstrating boxing equipment while offering to teach customers the art of self-defense, which Popeye is all too eager to convince Olive to try, but when the robust lady comes on to Popeye, Olive gets jealous and they end up fighting over The Sailor Man, with Olive losing until she eats Popeye's spinach, instantly knocking out the hussy and getting back her man. 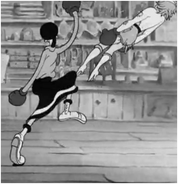