This article is about the animated short. For a catalog of sayings, see List of catchphrases. 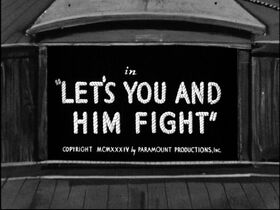 Let's You and Him Fight is Popeye's 7th cartoon short, produced by Fleischer Studios and released on February 16, 1934. Although the short is named after a J. Wellington Wimpy catchphrase, said character only makes a minor appearance. Oscar, meanwhile, makes his screen debut in this cartoon.

The Fight of the Century is announced between Bluto, the champ, and the challenger, Popeye the Sailor. Both can be seen training by hitting either a huge weight or a donkey that kicks back. Before the fight, Olive Oyl worriedly begs Popeye not to engage in such activity, but he does not say a word. She angrily storms off as he mutters "I yam what I yam and that's all what I yam". Next, Yank'em Stadium is flooded with spectators that mostly favor Popeye. As the fight starts, Bluto begins to dominate his opponent. Oscar, the radio announcer, relates the beating Popeye is taking to an audience that includes Olive. She decides to race back to the arena, bringing her beloved a can of spinach. This allows the challenger to regain his strength and launch his own attack on Bluto, hammering him like an anvil. The champ gets a momentary advantage by tying the sailor with the ropes, but this proves short-lived and Bluto is sent flying from the ring. He rebounds off the wall, however, and lands on Popeye, leading the referee to declare Bluto the victor. This prompts Popeye to give Bluto one last punch that hits the referee through his body, knocking both of them out.

Retrieved from "https://popeye.fandom.com/wiki/Let%27s_You_and_Him_Fight?oldid=35220"
Community content is available under CC-BY-SA unless otherwise noted.