Popeye the Sailorpedia
Register
Don't have an account?
Sign In
Advertisement
in: Characters, Male Characters, Royalty,
and 2 more

King Blozo the Third, the ruler of a fictional kingdom (whose name has changed through the years but is more frequently known as Spinachovia), is a character created by E. C. Segar for his Thimble Theatre comic strip.

Blozo is a noble, majestic monarch that has the well-being of his subjects as his only concern. His ruling methods, however, can often be dubious or ineffectual, which inevitably leaves him stressed out and causes him no end of worry, which he often engages in as a "hobby". Having befriended Popeye, the king has since welcomed the sailor's straightforward advice and ingenuity in solving seemingly impossible state problems.

King Blozo first appeared in the storyline of "The Great Rough-House War" in 1931.

After his appearance in Thimble Theatre, King Blozo would return as a recurring character in the 1948 comic book series by E. C. Segar's assistant Bud Sagendorf, where he would try to keep his stress under control while running his ever endangered kingdom. His comic book appearances would continue for decades until the title's end in 1984.

King Blozo made his screen debut in the 1960s Popeye television series, with episodes focusing on him being somewhat based on stories from the comics. He appeared in three episodes: '"Swee'Pea Soup", "Popeye's Testimonial Dinner" and "Incident at Missile City". His infrequent appearances could be attributed to the fact that, unlike Popeye's other friends, he lived far away on the island kingdom of Spinachovia.

King Blozo would re-appear in IDW Publishing's revival of the Popeye comics in 2012. He was featured in the fourth issue, where his kingdom was once again in trouble.

King Blozo is the reigning monarch of the island kingdom of Spinachovia, having inherited this position long ago from his father. He is a man who is constantly wrought with worry due to the many troubles that plague his kingdom, ranging from tiny menaces like Misermites to towering disasters like Giants, to coup de'etats from General Bunzo, his second in command and leader of the Army, to controversy over prohibition, to monetary troubles over the Pezozee, or worse, full-scale wars from neighboring countries, which are truly a never-ending source of concern for the stressed king. However, with the aid of his American friend Popeye, he always manages to restore order to Spinachovia (at least for the time being). 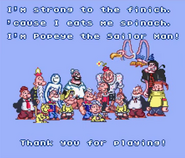