A hamburger, burger or hamburger sandwich is a popular dish believed to have been invented in the United States owing to influence from the cuisine of Hamburg, Germany. It usually consists of a patty of ground meat such as beef placed between the halves of a bread roll, although "hamburger" may refer also to the patty on its own. A hamburger sandwich can be served with tomato, lettuce, onions, condiments and other ingredients sandwiched along with the meat.

In popular culture, the character most associated with hamburgers is Popeye's friend J. Wellington Wimpy. While his preference for hamburgers is well noted, this may stem from their convenience and availability, for Wimpy is not one to shy away from any type of meal that could feed his considerable girth, as long as it can be obtained for free. In comics and cartoons revolving around Wimpy, hamburgers are typically central to the plot. Sometimes, this sees him get entangled in situations involving cattle.

Wimpy and other characters in the comics can usually be seeing eating burgers served by Rough House at the Rough House Cafe. In real life, the Wimpy-inspired fast food chain called the Wimpy Bar has them as their main menu item. 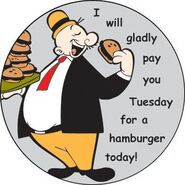 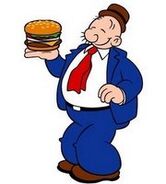 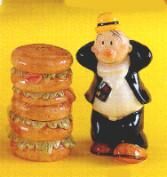 Add a photo to this gallery
Retrieved from "https://popeye.fandom.com/wiki/Hamburger?oldid=41404"
Community content is available under CC-BY-SA unless otherwise noted.