Popeye the Sailorpedia
Register
Don't have an account?
Sign In
Advertisement
in: Characters, Species, Races and Tribes, Fleischer Studios,
and 3 more

Giants are a species of extraordinarily large humanoids that have appeared several times in Popeye cartoons and comic books. They generally act as a major threat to Popeye and his friends, often in adaptations of Jack and the Beanstalk (with Popeye playing the role of Jack) while other times Popeye in fact encounters them during his adventures.

Giants are mostly portrayed as primitive and violent, with the exception of the friendly Georgie the Giant. Their exact origin and homeland is never stated, but it appears that they may live near the island kingdom of Spinachovia as King Blozo has dealt with them on a few occasions and once made a deal with two football teams of giants to host a game in his kingdom to attract a large audience and earn more cash for his emptying coffers. 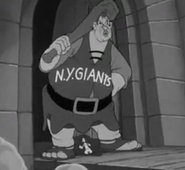 The giant from Ration Fer the Duration

The giant from Let's Stalk Spinach

A giant football player in Popeye the Sailor issue #71

A demon transformed into a giant 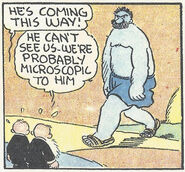 A giant in Sappo