Elzie Crisler Segar (December 8, 1894 – October 13, 1938) was an American cartoonist, best known as the creator of Popeye, who first appeared in his newspaper comic strip Thimble Theatre in 1929. He was also the author of the Sappo strip.

Segar was born and raised in Chester, Illinois, a small town on the Mississippi River. The son of a handyman, his earliest work experiences included assisting his father in house painting and paper hanging. Skilled at playing drums, he also provided musical accompaniement to films and vaudeville acts in the local theater, where he was eventually given the job of film projectionist. During this time, at age 18, he decided to become a cartoonist. He worked hard on a correspondence course in cartooning from W.L. Evans, of Cleveland, Ohio, in which he had invested $20. He said that after work he "lit up the oil lamps about midnight and worked on the course until 3 a.m."

Segar moved to Chicago where he met Richard Felton Outcault, creator of The Yellow Kid and Buster Brown, and Outcault encouraged him and introduced him at the Chicago Herald. On March 12, 1916, the Herald published Segar's first comic, Charlie Chaplin's Comedy Capers, which ran for a little over a year. In 1918, he moved on to Hearst's Chicago Evening American where he created Looping the Loop. Segar married Myrtle Johnson the same year; they had two children.

Managing editor William Curley thought Segar could succeed in New York, so he sent him to King Features Syndicate, where Segar worked for many years. He began by drawing Thimble Theatre for the New York Journal. The strip made its debut on December 19, 1919, and featured the characters Olive Oyl, Castor Oyl, and Ham Gravy, who were the comic's leads for about a decade. In January of 1929, when Castor Oyl needed a mariner to navigate his ship to Dice Island, Castor picked up an old salt down by the docks named Popeye. The Popeye character "stole the show" and became the permanent featured character. Some of the other notable characters Segar created include J. Wellington Wimpy and Eugene the Jeep.

Asked how to say his name, he told The Literary Digest it was SEE-gar. [1] He commonly signed his work simply "Segar" or "E. Segar" above a drawn cigar. (At that time, the word "cigar" was often pronounced in the slangy way "SEE-gar" instead of the more proper "sih-GAR".)

After a long time of illness, Segar died of a liver disease at the age of 43. Eventually, Segar's longtime assistant, Bud Sagendorf, would take over the Popeye strip and continue it for decades.

The National Cartoonist Society created the Elzie Segar Award in his honor.

Segar depicting himself in his daily activities 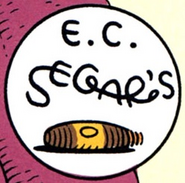 A modern recreation of Segar's signature for the IDW Popeye comics