A cigar is a tightly-rolled bundle of dried and fermented tobacco leaf, made in a series of types and sizes, that is ignited so that its smoke may be drawn into the mouth. Cigars are noted for their association with Popeye's creator E. C. Segar (pronounced SEE-gar), who would draw a cigar as part of his signature, reflecting the word's pronunciation at the time.

Cigars were somewhat rare in the Fleischer Studios cartoons, however Bluto was an avid cigar smoker in them and this was usually used to add to his image as a street tough but, unlike Popeye's pipe, his cigars only made sporadic appearances and did not become a requisite trait of the character.

Cigar smoking is seen in other cartoons with characters other than Bluto. Popeye himself once smoked the entirety of a rather large cigar in one puff to prove his manliness to the Bruiser Boys Club in Can You Take It. However, after the Famous Studios era, cigars became almost non-existent in later Popeye media, likely as to avoid encouraging young viewers to smoke.

Can You Take It 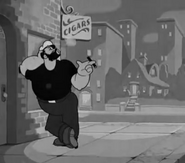 Nurse to Meet Ya