Popeye the Sailorpedia
Register
Don't have an account?
Sign In
Advertisement
in: Popeye's Episodes, Famous Studios, Cartoons Where Popeye Nephews Appear,
and 2 more

Cartoons Ain't Human (released on September 3, 1943) is Popeye's 122nd cartoon, the last to be produced in black and white by Famous Studios.

Popeye produces countless drawings to create a homemade animated cartoon. Afterwards, he shows it to an eager audience consisting of his nephews and Olive Oyl: his masterpiece, entitled "Wages of Sin (Less 20%)" features effects and music by him (the hornpipe included) and stars the cartoon-in-a-cartoon version of himself, Olive and a cow as they contend with "Roger Blackleg", a mustachioed, Willy Wormwood-esque antagonist. After the villain unsuccessfully tries to woo Olive then abducts her, she telephones Popeye, who was away finding his fortune. A lengthy chase ensues on horseback, over the water, and even on bull/turtle-back or kangaroo-pouch as Olive is cruelly tied to railroad tracks by Roger Blackleg. When one of the boys in the audience accidentally hits the high-speed switch, the chase becomes ever more frantic and the presentation slides all along the walls, from the projector moving out of place. The animated film is attentively followed to its happy spinach-filled conclusion as finally projected onto Olive's nose. 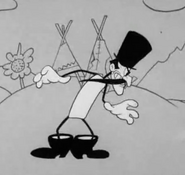