“They'll always be afraid of us... as long as we keep 'em stupid!”
—Bruiser Boys Club

The "Bruiser Boys Club" was a group of thuggish brutes in Puddleburg that enjoyed tormenting the townspeople to the point where Puddleburgians preferred to become lazy and do nothing, in order to avoid doing any action that could incur in the wrath of the Boys.

The Bruiser Boys were created by E. C. Segar for his 1933 Thimble Theatre storyline "Puddleburg, the Laziest Town in the World".

The Bruiser Boys appeared in the Fleischer Studios cartoon Can You Take It in 1934. Due to the standalone nature of the theatrical shorts, the saga of Puddleburg could not be fully adapted, so rather than being a group of tormentors, the Bruiser Boys Club was instead portrayed as a club for tough guys in which only the strongest and manliest were allowed. As such, their initiation was brutally difficult and almost everyone who tried to join ended up in the hospital. Bluto was also portrayed as the leader of the Bruiser Boys in this short. Popeye sought to join their club to prove his manliness, but when he passed the initiation, Bluto resorted to cheating and sneakiness to ensure Popeye failed, and promptly shipped him off to the Club's hospital wing. Upon awakening, thanks to Nurse Olive, he learned that he was not tough enough to join, which enraged Popeye greatly. He then ate his spinach to heal his wounds post-haste and quickly ran back into the club building and showed no mercy to the Bruiser Boys, effectively pummeling every last one of them and defeating president Bluto. This made Popeye the proud new president of the Bruiser Boys Club, however, the club's building fell to pieces soon after due to the all-out brawl.

The Bruiser Boys Club would be featured again in the 1960s Popeye animated television series episode "What's News", which was a loose adaptation of the Puddleburg story, with the Bruiser Boys again as the town's tormentors. Unlike in Thimble Theatre, the "Bruiser Boys Club" were simply three hulking, bald lookalikes who spoke in unison.

Puddleburg, the Laziest Town in the World

After Popeye and Olive were given their own newspaper business in Puddleburg by Mister Works (called the Puddleburg Splash), it proved to be unpopular. Popeye and Olive then tried to boost sales by raising interest in reading. That was when the Bruiser Boys Club arrived to ruin Popeye and Olive's plans, due to wanting to keep Puddleburg lazy and stupid so they could keep doing as they pleased.

Eventually, Popeye decided to encourage the Puddleburg citizens to fight back against the Club. To do this, he dressed up as a helpless old lady and then easily defeated the Bruiser Boys, which caused the townsfolk to see the Bruiser Boys as wimps and run them out themselves. With the Bruiser Boys Club gone, Popeye's newspaper became a hit and he was able to sell it back to Mister Works for a good price.

A member of the Bruiser Boys Club fighting Popeye 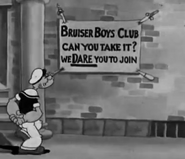 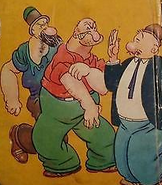 Add a photo to this gallery
Retrieved from "https://popeye.fandom.com/wiki/Bruiser_Boys_Club?oldid=39073"
Community content is available under CC-BY-SA unless otherwise noted.