Boxing is a martial art and combat sport in which two people wearing protective gloves throw punches at each other for a predetermined set of time in a boxing ring. It is often engaged in by Popeye, originally in the comic strip Thimble Theatre, where he was compelled to do so soon after acknowledging his own immense strength.

In the strip and later comic books, Popeye and friends would use this activity as a means to make money, while each opponent would be more formidable than the last to appropriately challenge the mighty hero. This is one activity from the comics that has also been portrayed in other Popeye media such as the live-action film and several classic cartoons like Let's You and Him Fight, Spinach Packin' Popeye, Out to Punch and Punch and Judo. 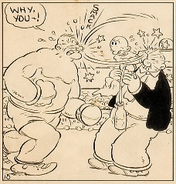 Jack the Zipper vs Swee'Pea

Kid Klutch vs Popeye in Popeye fights against a gorilla

Popeye vs Bluto in Let's You and Him Fight

Olive vs the Sporting Goods Manager in Never Kick a Woman

Popeye vs The Champ in Punch and Judo

Popeye vs Bluto in Out to Punch

Phantom Crusher vs Wimpy in The Phantom Crusher
Community content is available under CC-BY-SA unless otherwise noted.
Advertisement