Popeye the Sailorpedia
Register
Don't have an account?
Sign In
Advertisement
in: Characters, Male Characters, Famous Studios,
and 3 more

In contrast to the genteel look of Poopdeck Pappy, who in this instance wears the proper fashion of the era (quite uncharcteristically) and is clean-shaven in his younger days, big daddy Bluto has a more ethnic and working-class look with his burly physique, handlebar moustache and rakish bowler hat. His interactions with Popeye's father--a sudden and thoroughly unprovoked recourse to violence--parallels that which he encourages his son to do to Popeye.

He is shown teaching the boy to communicate with his fists ('OK, Bluto, give 'im a boxing lesson!') and encouraging the junior ruffian to intimidate 'little weakling' Popeye in the playground. At first amicably sharing a park bench with Popeye's dad as the two fathers observe their children's activities, the brutish senior Bluto snares the mannerly Pappy on a lamppost in order to stop him from saving his baby (who is careening down a hill in his carriage), then begins to administer a vicious beating as infant Bluto looks on enthralled.

It is up to little Popeye to consume the spinach juice in his baby bottle and to rescue his helpless father from certain annihilation at the hands of the brute, and to teach the 'big bully and his little bruiser' that violent behavior can beget violent retribution. 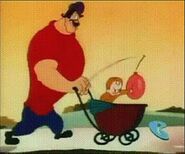 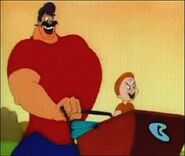 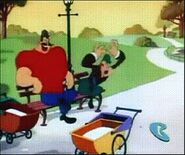 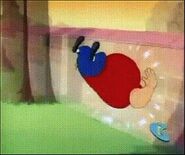