Popeye the Sailorpedia
Register
Don't have an account?
Sign In
Advertisement
in: Popeye's Episodes, Famous Studios, Recycled footage,
and 3 more

Popeye takes three of his nephews on a visit to a Nautical Museum. They come across a colossal statue of Sindbad, with the inscription "Greatest Sailor in the World", upon which Popeye relates the events of Popeye the Sailor Meets Sindbad the Sailor to the kids. They then proceed to re-chisel the statue into an image of Popeye, with the 'Greatest Sailor in the World' inscription left intact. 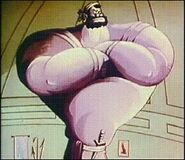