Popeye the Sailorpedia
Register
Don't have an account?
Sign In
Advertisement
in: Characters, Female Characters, Fleischer Studios,
and 2 more

Bonnie Poe (Popeye The Sailor)
Mae Questel
Margie Hines
Betty Boop is a character created by animators Grim Natwick and Max Fleischer for Fleischer Studios in 1930, first seen in the animated short Dizzy Dishes and going on to appear in a total 110 cartoons. Originally an antropomorphic French poodle, she soon changed into a young human girl noted for her sex-appeal. Her last cartoon appeared in 1939, after being toned down due to restrictions set by the film industry. However, comics and television specials later appeared and she remains a popular merchandise icon.

Fleischer Studios introduced Popeye into animation in the short Popeye the Sailor, which in fact belonged to the Betty Boop series, with the actual Popeye series soon to follow. The cartoon is titled "Popeye the Sailor with Betty Boop", although most of the action revolves around him, Bluto and Olive Oyl. Betty does in fact appear along Popeye, both performing a dance together on stage, in effect making Popeye's first screen appearance a "cross-over".

As late as 2016, a new cross-over would be produced: the promotional animated web comic Spinach and Stockings: the Adventures of Betty Boop and Popeye.

Rumor has it that in September 1938 head of Fleischer Studios Max Fleischer, as a thank-you to all artists who moved to his new animation studio in Florida, animated a graphic sexual encounter between his two stars, Betty Boop and Popeye. Reports on this supposed film, known as “Welcome to Miami”, range from it being 30 seconds of pencil drawings to a full-color short film. 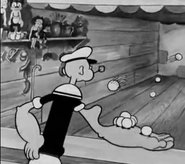