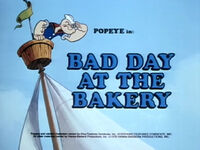 "Bad Day at the Bakery" is an episode from The All-New Popeye Hour's "The Adventures of Popeye" in association with King Features Syndicate. 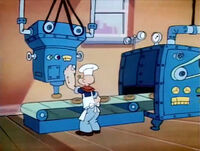 Popeye and Bluto ride a motorcycle down to Olive's new bakery on a badly paved street. Bluto ejects his sidecar, with Popeye still in it, but Popeye throws it on Bluto's head just after they arrive at the bakery.

Olive gets the boys to run the shop while she goes to the mayor's office to arrange media coverage for her shop.

Popeye is first seen making doughnuts, with one of them being rejected due to its square shape, since doughnuts are supposed to be round. Bluto punches many of the doughnuts to the floor, which angers Popeye, so he turns Bluto into a doughnut and covers him with typical doughnut toppings. Bluto is so messy from those toppings that he too gets rejected.

Next, Popeye squirts jelly for jelly rolls. Bluto now sees his chance to get rid of Popeye: he does so by first giving Popeye the now disconnected blender, which sends him spinning off. Bluto then traps Popeye into the oven and pushes him out of the bakery to the city dump.

Bluto then proceeds to do some baking of his own. He uses eggs, yeast and supposedly some flour, but he takes a bag a cement by mistake. He then mixes them together and throws his dough into the oven.

Meanwhile, in mayor Wimpy's office, Olive promises him free publicity and all the hamburgers he can eat. Popeye sees Olive and Wimpy coming, so he eats his spinach and flies back to the bakery still in the oven he was trapped in. He then literally sends Bluto through the wringer. Meanwhile, Bluto's cement mixture comes seeping out of the oven. Seeing that Olive and Wimpy will get stuck in there, the sailor grabs Bluto and a roller from the machine he was in and flattens the cement, effectively paving the streets to Olive's shop. Unfortunately, Olive's store gets ruined in the process, so Popeye rebuilds it with the exterior in the shape of a cake, with Bluto as the decoration at the top.

Wimpy congratulates Olive for paving the streets and gives her a medal, and Olive thanks Popeye for fixing up her shop. Finally, there is one thing Olive likes more than good pastries, and that is ♩Popeye, the Baker Man♫ (toot, toot)!

Retrieved from "https://popeye.fandom.com/wiki/Bad_Day_at_the_Bakery?oldid=39323"
Community content is available under CC-BY-SA unless otherwise noted.